Trying to find a topic or review?

Welcome to my world of amusement! Fishing for metaphors in books, films, video games, and TV shows is my passion.

All articles/posts written by me, Halsdoll.

I am here too!

NightCry is indeed a survival horror game and it felt like one. But it made me laugh more than it scared me. Now I sound a bit sadistic, but hear me out.

The game is designed to have multiple endings, but of course there is a good ending. That’s the one you want! I found myself  playing the game as if I am working on a math equation. The moment where you thought you had the answer, but your answer is wrong because you missed one little step?  Yep, NightCry will steer you to the path where you’d meet your early doom because you got the wrong answer! Occasionally, I heard someone laughing inside my head because I was like a mouse running inside a maze, trying to find an outlet only to find myself at a dead end. What a cruel joke.

Gameplay is very simple: light puzzles, running, and hiding, but you can’t always hide at a place twice, and if you fail to hold your breath, Scissorwalker will cut you up. Yes I died many times. 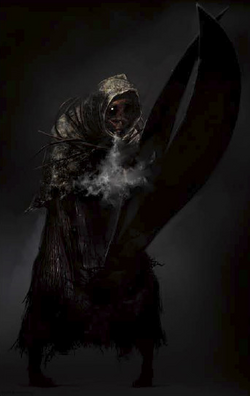 The Scissorwalker is a bit humorous to me. That thing likes to play peek-a-boo. Got to be careful not to examine everything, doing so will trigger the Scissorwalker to appear, but it’s necessary. The character runs out of stamina easily and starts falling on the floor, making it easy for Scissorwalker to snip the character to death. So you better know where to run to! I made a mistake entering a dark room without turning on my flashlight. I got killed. I laughed. Game over.

As for the characters, I found them fashionable, simple and charming. There are three characters you can control: Monica, Leonard  and Rooney ( her name sounds like loony).  They are well designed for their roles. In fact, I like all of them.

I won’t spoil the story for those who are interested in the game, but I think the game is intended for those who are suffering from depression. Sometimes when things get too crazy in life, your mind is switched to survival mode, you got put your hand on your hip and remind yourself you are given life to live. So live!

My final thought for this game is that people experience games differently. Currently my life is not that cheerful so I can relate to both Rooney and Monica. So it may seem odd that I can laugh at such a game. I would classify this game as a dark comedy survival horror game if I could, but that is just subjective. But overall, I enjoyed the game and I’m glad  I didn’t let some negative reviews hindered me from playing. You can never know whether a game is good or not until you try it yourself. Playing a game is a different experience from watching.  So go play it!

I don’t know what happened, but gradually over the few years, I begin to lose interest in Resident Evil franchise despite the fact,  I enjoy playing all of  the RE games, but I think I’m getting tired of playing them and I’m losing faith that it will ever return to its roots as a survival horror genre.

It all started  with RE4, RE5 and RE6 on how the games are broken into chapters/campaigns. At the end of each chapter, I was given a”report card” on how well I did:  hit ratio, number of time killed, enemies routed etc. Because I am forced to acknowledge my performance, I spent more time focusing on how well I played and not so much about the survival aspect of the game.  This report card sort of destroyed the survivor horror experience  I had with RE1, RE2 and RE3.

I remember the earlier Resident Evil games were more story-driven and suspenseful. For example, in RE1, the characters are chased into the mansion. The mansion seems like a haven in the middle of the woods. They thought they are safe, but they are wrong. As they venture deeper into the mansion, they uncover its secret. Then with the realization that they might end up as zombies, they attempt to escape, knowing what they uncover is epidemic. To escape from something horrific is survival horror.

I didn’t feel this way about RE4, RE5 and RE6.  There is too much action going on in these games which make it difficult for me to follow Resident Evil’s timeline. Both RE4 and RE5 are very similar, in terms of structure. The environment did not feel claustrophobic. It didn’t make me feel as if I need to escape since I am already out in the open. In RE4,  the appearance of the Merchant acknowledges that this is a shooting game. It allows me to tune up my weapons right before when there is a serious zombie action event.  RE5 is even worse, in terms of survival horror,  Chris and Sheva are given handguns right after they walk pass the villagers.  The way how the handgun is given RE5 is not subtle compared to RE1, when Chris finds a handgun on the floor in the lobby and wonders where Jill and Wesker disappear to. Lastly, RE6 starts out dramatically with explosion. This is just a pure action-based game.

My argument is that the way how RE4 , RE5 and RE6 were introduced and narrated, made it less suspenseful, which in turn, made it less about survival horror. So I can’t say whether I am too excited about RE7. RE games have always been cinematic but how well it is executed will determine whether it falls into the survival horror category or not. I wish I could enjoy the demo, but sadly the first person-view  made me sick. I think I am going to wait for this one to go on sale instead of playing on launch day.

Kuon, developed by FromSoftware, was one of the survival-horror video games I tried to squeeze in the month of October because of Halloween, but I ended up playing it into November.  It took me a month to complete  because I took my time and did not play every day. You can complete the game in 10 hours or less. Despite the short length of the game, Kuon is exceptionally great and is now on my top list of favorite games. Let me explain.

The art direction in this game is superb as it reveals a simple but strong plot. The  use of sound effects and music created an intense horrific and isolating atmosphere. There were a few times, I was startled.  And yet, at times, it was not all scary. The sound of nature (e.g., footsteps, stream, wind) can be heard throughout the game, giving life to the atmosphere.

The placement of the sound effects ( monsters groaning, monk chanting in the temple, the twins singing) in the game were not overdone or overused. They all served a purpose and integrated really well to build suspense and tension. They also acted as subtle cue to steer me to the right direction, without acknowledging that I was playing the game. I was in the game.

Lastly, the three different protagonists (all females with unique personality)  which were played in three different phases, summarized the story so well that it left me feeling awe and sorrowfully happy.

Because of the game’s art direction, I was drawn to the game and understood the plot. This game is about the perversion of immortality. The father is so  driven to perfect the spells at the expense of his own daughter’s life and his disciples that he loses his humanity. The father, an authoritative figure, is evil and must be defeated by  the master exorcist, who is like a motherly figure. She rebukes the father and put things back in order.

This was the impression I got from the playing the game. Without the  art direction in this game, the story might have not been told well. It might have been another horror video game. But this one is special. It taught me something: We will die one day, why not enjoy the life we are given now in the present moment instead of tampering with something beyond our scope of reasoning?